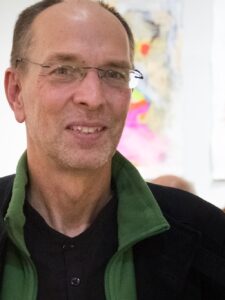 “In Canuto Kallan’s works, the joy of creation comes to life through his spontaneity, imagination, and the free and improvisational way in which he handles the medium. His experimentations with colour and the way he feverishly applies it results in an intensity that extends far beyond the paintings’ surface. The simplicity of his figures lends them liveliness and a rhythm which excites the viewers’ eyes into a constant state of alertness and keeps their interest intact.”

Canuto Kallan was born in 1960 in Copenhagen, Denmark. Before studying at the Athens School of Fine Arts, he graduated from the Technical College of Copenhagen as a cabinet-maker and was awarded the Silver Medal for Woodworking by the Queen of Denmark. In 1990 he graduated from the Technical University of Denmark as a Mechanical Engineer with a Master of Science in Engineering. With a scholarship from the Istituto Italiano and the Knud Højgaard Foundation, he attended classes in wood restoration at the Istituto per l Arte e il Restauro, Firenze.
2003 he graduated with distinction from the Athens School of Fine Arts, Integrated Master in Visual Arts, where he studied painting and printmaking.
During the 2010 FIFA World Cup South Africa™, he was invited to represent Denmark as one of five artists in the “2010 Fine Art” world art event and exhibition.
In November 2010 Canuto Kallan and the Danish musician Morten Carlsen started interdisciplinary cooperation transforming images to music and vice versa.

Until today he has presented his work in 5 solo shows in Denmark and Greece and has participated in numerous group shows around the world. See more details in the section “Exhibitions”.

Canuto Kallan is a member of the Greek Chamber of Fine Arts and the art group “aná”.
He lives and works in Athens.

You can find out more about which cookies we are using or switch them off in settings.

Cookies are small text files containing information, which are stored on the browser of your computer during your browsing at the Website kallan.gr and can be removed at any time.

Cookies let you use and improve your experience at kallan.gr, navigate efficiently between pages, as well as provide advertising content based on your interests and needs. In addition, we use cookies to analyse how our visitors use epehli.gr, how they navigate or to fix any possible problems as well as to improve the structure and content of our Website.

Strictly necessary cookies are essential to the proper functioning of the Website while they allow you to browse and use the Website features. These cookies do not recognise your personal identity. They are technically necessary for the Website function and you are not able to disable them.

If you disable this cookie, we will not be able to save your preferences. This means that every time you visit this website you will need to enable or disable cookies again.

Session Cookies
Session cookies are temporarily stored on your computer or device during a browser session and are deleted after the browser is closed.

Performance Cookies
Performance cookies collect information about how visitors use the Website, for instance, which pages they visit more often and whether they receive error messages from webpages. These cookies collect aggregated, anonymous information that does not identify visitors. They are used exclusively to improve the performance of our Website.

Please enable Strictly Necessary Cookies first so that we can save your preferences!